The Lamptron "FC Touch", and the Scythe "Kaze Server".

An "Intelligent" fan controller?
There are many fan controllers on the market, but surprisingly few of them have even the simplest of intelligence.
Most Fan Controllers are simply readouts for the temperature sensors, and "volume controls" for the fans, meaning YOU have to set the fan speed, which is tedious, and problems are inevitable (ie you will forget to turn up the fans when you are stressing your machine sooner or later).

Most motherboards have some control over fans, and mostly they are clumsy

To me it seems natural that the fan control should be completely separate of not just the Operating system, but even the BIOS of the Motherboard.

Queue the independent intelligent controller. It keeps the fans slow and quiet when the PC is running cool, and when things start to heat up, it speeds the fans up.

These are the two controllers I have found that fit the bill.
Both do the trick, neither are perfect.

Supports up to 4 separate fans and sensors 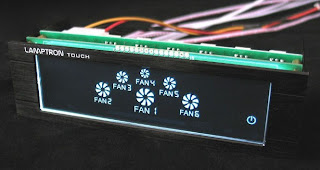 http://lamptron.com/products/view/Fan_Controller_Touch
Supports up to 6 separate fans and sensors.

Connecting the fans
is really annoying with the Kaze server.
To connect the fans, you need to use the included "extension" cables which you can plug a 3pin (or 4 pin - it ignores the 4th) fan into.

For some reason the extension cables change the connector type from the standard fan connector into another type. I have seen the type on some Video card fans, Im not sure what it is called, it should be called "annoying".
Unlike standard 3pin fan connectors, this type are tiny, and "lock" into place, which makes them difficult to both install, and remove. Scythe have not made this any easier by cramming the sockets  into the corner of the unit  under the display unit.
While the first of the four fan extensions can be installed with just your fingers (if you concentrate), once one is in, the other three required the use of a tiny screw driver just to get them plugged in. Getting them out is a nightmare... its a weird maneuver that requires the deft use of two simultaneous small screwdrivers, while gently pulling the cable... which is impossible... so after 15 minutes and a drink you just yank them out by the cord.. I think I broke one doing just that.
Once, you have done the (up to) 4 connectors, suddenly have all this extraneous cable you have to put somewhere... not a big deal in a full size case, but working mainly with Micro-ATX boards as I do, every square cm is vital, and in this case the extra cabling is awkward and messy.
The "extensions" supplied are all 70cms long, which is longer than most fan cables, but you have to use them because of the non standard fan connector type.


Connecting the power -
Just because they could, Scythe also changed the power plug from the standard Molex type to a similar type to the "annoying" type they use for fans.. also with a strangely long extension cable.
By Comparison, The Lamptron used standard 3 pin fan sockets and molex for power, and was simple and easy.

The BEEEEP!
The Scythe has a built "audible alarm" in case a fan shuts off for no reason (like say you damaged the cable extender when you yanked it out). This alarm is loud and piercing... Think smoke alarm, except one day that might inform you of something more important than burnt toast...
I know the unit is called the "Kaze Server", but Enterprise servers havent beeped over failed fans since the nineties..
Anyhow there is a jumper to pull out to avoid being woken in the middle of the night thinking the house is on fire.

The Scythe Kaze Server
The trick with the Scythe is to realise the knob pushes in (as well as turns) to change the mode (yes it took me a while).
Once that is sorted the Scythe was intuitive and simple to tweak. getting each of the fans running as slow as possible when their sensor is below the threshold.
Fan RPM and sensor temperature for all four fans are visible at once making getting the settings "just right" very easy.
There is an issue with the viewing angle on the Scythe, you pretty much have to stick your face right in front the display, or you cant read it. This is dissappointing since the "cheaper" Kaze models (the Kaze Master for example) have far better displays, which are multicoloured and easy to read from almost any angle. In the end this is not so important as once you have configured the unit for automatic you wont be looking at it much.

http://lamptron.com/products/view/Fan_Controller_Touch
Supports up to  6 separate fans and sensors.

Cons
Automatic mode too sensitive
Only displays info on one fan/sensor at once.
Programming a bit clumsy

Supports up to 4 separate fans and sensors

Both units have annoying quirks, but each seem to have sorted out the quirks of the other which makes this comparison interesting.


Despite the significant problems with installation, Once the Kaze server is installed, it runs well,
This story is not yet finished, but basically The Scythe was a BASTARD to install with a host of uneccssary annoyances, but once it actually IS INSTALLED, it runs almost perfectly.

You can see all the temperatures and fan speeds at a glance (albiet you may have to touch your shoulder with your ear to actually see the "tunnel vision" display).  Once you get the idea that you can change the mode pressing the actual knob in,  It runs like a dream.


The temperature triggers are delayed

The Lamptron was easy to install