Most of you get it, and that is great.
Some of you just have no idea whats going on, but it would still be great to hear what you think.

Here is my take on some Do's and Don'ts, what people think, and what people want in tweets.

Although who knows?
Some VERY successful Twitterers break all these rules constantly.

They just come across as idiotic In My Humble Opinion.

It is polite to follow someone who follows you first, but not compulsory.
If you appear to follow people who follow you, you are liable to get more followers early on.

There are sites that will offer you as many followers as you like, as long as you pay for them.
The "fake" followers never say anything, never do anything, and don't answer back.

Therefore, a shortcut to personal growth, international stardom, and widespread appreciation would be to purchase more and more "fake followers".

There are sites that can that can show how many REAL followers (and therefore how many fake followers) anyone has.

It's nice that you coughed up a whole $50 for 1000 fake followers,  but it's like showing up at a nightclub with 20 cardboard cutouts as friends...it's just creepy...

Ultimately you are just drawing attention to the fact you have no friends/followers,
or at least that you want more than you have earned.

From all the people in the world, out of the entire entertainment industry, you have have just been granted 2 seconds of their precious time.

They probably chose you because things that interest you may interest them..


How do you intend to waste it?

There are good ways, there are bad ways.
If I knew the formula I would be rich and I would not tell you.

Just put up stuff that YOU think is interesting, not what you think or are told other people might like.
People actually want to hear from you, and ultimately, that is all you really know.

PEOPLE CARE ABOUT:  Things that interest you.

If you can't squeeze it into 140 characters.. Don't tweet it.
Multi tweet messages are jut annoying, no one really cares that much anyway.
If it is so important and complex, write a blog post and link to that.

Nd fr gdsake stp tryn to cram more wrds into the tweet.
It's annoying to read.. Most people just skip.

Also If any one is going to retweet it, it needs to be 140 minus the length of your username, minus five more characters for the "RT @YourUserName " in the tweet also.

PEOPLE DON'T HAVE TIME FOR: Your meandering rants.


KTB (is short for KThanxBai which itself is short for OK Thanks Goodbye)  this one is especially annoying since you can just say "bye". And Who the hell thinks "bai"is shorter than "bye" anyway??.

And why would you say bye if you didnt start with at least "Hi" and why the hell would you waste characters on that in a tweet???.

Its supercilious, stupid, smug and childish.

Although 4 people retweeted this within an hour, just to prove me wrong.

PEOPLE DON'T CARE ABOUT: Your internally inconsistent language known only to you.


6) No useless information please....
"Good morning" is especially pointless since in half the world at any time it is not morning, and at least some of the rest, it is not "good", so you are guaranteeing you will be incorrect to most of the people who read your tweet.
"Hello Tweeples" is basically announcing to all you followers:

Either
"I don't really understand how twitter works." and  "and I'm a bit naive as well."

So I guess we will keep you around for your pearls of wisdom then.

Tweeting  "Goodnight" is like leaving a party, going home, then calling back and saying goodbye to everyone over the speakers.

If it is the best damn meal you have ever had, you wont know till you have finished it, unless you have had an identical one before...

PEOPLE DON'T CARE ABOUT: What you eat

... unless you are about to be executed, and even then its borderline.

It will help get your message out to anyone who searches for that Hashtag, even if they dont follow you.

Try try to use no more than three hashtags in one tweet.

There are websights to help you find popular Hashtags for any subject...
They can be useful finding the right audience.

PEOPLE CARE ABOUT: What they are searching for... plug into that.

If we were as enthralled as you about the contents if their last 18 tweets,
we would have followed them too...

PEOPLE DON'T CARE ABOUT: That thing you are really obsessing about right now.

Arguments are good. Abuse is Lame.

When you are having  a heated conversation with someone, it will be more visible than a normal tweet (as there are more tweets) and sometimes these conversations are interesting...

Mindless abuse is meaningless, (and boring) especially if it is between two people you have never met.

If you really think someone is such an imbecile that you will never manage a constructive conversation with them, then you are probably wrong;
but at least have the decency to tell them (and then block them if you really mean it).


PEOPLE DON'T CARE ABOUT: Your ego, or your inability to maintain civil conversation..

People say things all the time you will wish you said first, and possibly agree with more than the person who said it, but this does not give you the right to claim the original idea as yours.

Apart from being lame and rude, you should retweet it to give the originator credit where it is due.

It is only too easy to track down past anyone's past tweets (including yours) and compare them with the tweets of anyone else.

The real danger with this behaviour is it will call into question the validity of your other tweets
(including the rare very original and awesome ones).

Im Designing a Solar Still and putting the whole thing up blow by blow on Overclockers.com.au


I have had this idea going around in my head for a while, and I thought this would be a great place to work it...

I been trying to design a solar stilll (a device to extract drinkable water from seawater) using only 2 standard plastic softdrink bottles, with probably the use of just a knife.

Most shorelines around the world have bottles washed up in them, and just running through the various ways of putting them together makes my mind spin..

I will be putting forward my own designs in this thread.
I challenge anyone to beat my designs


Produce enough drinking water from seawater to sustain 1 person
Produce a design that can be easily repeated.
Show proof the design works
Design is public domain.. the plan is to tell everyone in the world.
Use only 2 plastic bottles

Winner will be the system that produces the most drinkable water.

It is possible that this task is impossible.... thoughts?

From a scale of 0 (absolutely nothing produced) to 10 (industrial desalination plant)
This one scored 0.00001
Amount of drinkable water produced: Significantly less than 1ml

After 3 hours of direct, if slightly cloudy sunlight on my sunny morning balcony (which has in the past been compared to the chronicles of Riddick in terms of sunlight power) it got misty in there, but very little water actually appeared at the bottom.

I'm not even sure if the couple of droplets of moisture at the bottom of the bottle weren't there before :)

There are a couple of variables to play with here;
- less water water in the cup next time?
- maybe a solid or tinted cup would have heated up more..
- maybe a tinted/painted bottle would have heated up more.
- I had an issue with joining the top to the bottom, since I cut them where they were even, I will next time make the upper part slightly smaller so it slides inside the bottom part. 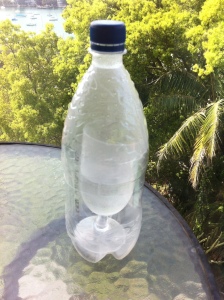 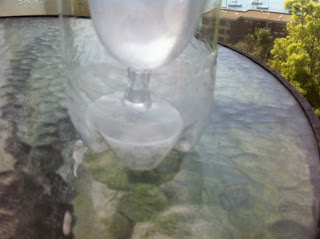 
Worked a couple of bugs out.

Produced about 5 mls of  drinking water (if that!)

Used some magic tape to seal it up a bit, just because I knew this one would suck, and was more looking for proof of concept..

Heres what I learned..

1) before you cut the top off the outside bottle, mark it, so you can orient the two parts to their original position re each other... to get a solid seal is vital (more pressure means more heat means more condensation)

3) A tool that can puncture would make the work alot easier especially if you are making a complex one.

4) Its not just the direct sunlight that does the work (although it does alot) leaving it overnight had (a small effect). 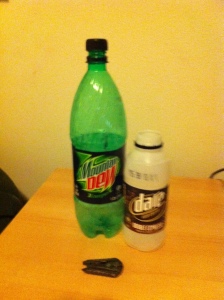 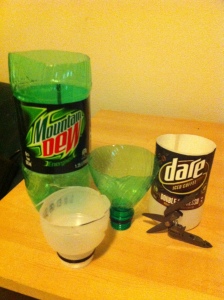 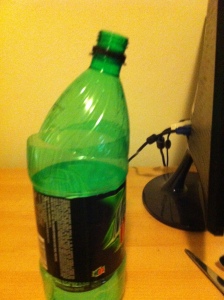 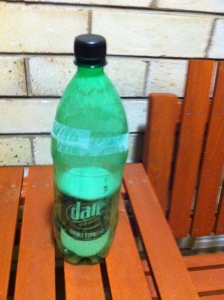 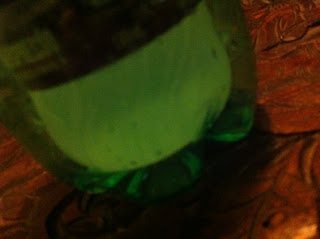 Posted by CPU Barbeque at 7:35 PM No comments: